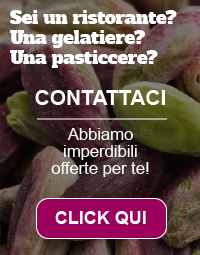 The Bronte Pistachio is a pistachio variety that grows only in the Bronte area. This product has the DOP certification and its production is  regulated and controlled.

The color is bright green (it is called "green gold") and its taste is refined. The production of Bronte pistachio represents 1% of world production, so this is a niche product and its price is often high because of this.

The pistachio from bronte is transformed in many ways by master craftsmen Bronte, examples are:

Due to the high costs which assumes the adjustment of production facilities for the use of the DOP mark, many producers, artisans and traders are forced to name as Sicilian Pistachio although the product they sell is from the Bronte area.

The Pistachio of Bronte is "celebrated" every year, between late September and early October, during the "Festival of Pistachio" when thousands of people visit the town Bronte to taste it or to establish business relationship with local producers. The duration of the festival is typically 1 week.

The plant of Bronte Pistachio is called  Pistacia Vera, is a hermaphrodite plant of Persian origin. It is long-lived (up to 300 years of age) and may yield only after 10 years of his engagement.

Despite being a fairly common plant, those born in the territory of Bronte have their roots (sometimes very steep volcanic origin) in volcanic ground that result in the typical organoleptic properties of the pistachio of Bronte. This plant is able to produce fruits annually but the fruit is collected only biennially. In facts in odd years the fruit is dropped when not yet mature. In this way the plant may rest for one year and production of the following year will have higher quality and quantity.

The pistachio harvest occurs every two years and is done exclusively by hand.

Where possible nets are disposed under the trees and pistachios are dropped by shaking the branches with a stick.

In most cases, however, this is not feasible as the ground is extremely steep. When nets are not usable is necessary to collect the fruit by hand with the help of special straps (called sacchine), clusters are taken one be one (called jumbo) inserted inside the sacchina and subsequently handled in such a way as to make the fruit fall within the bag. A grown man is able, through this system, to collect up to two 50kg bags of pistachios a day.

The collection of pistachio makes the hands and arms sticky and black, this is due to a particular resin which is present in the tree, the resin is very difficult to wash (petrol or alcohol may help).

Once collected and placed in special bags pistachios must be processed immediately. At the time of harvest, in fact, the fruit is covered by the husk. The husk must be removed as quickly as possible because the fruit may be damaged or stained due to the high humidity of the husk.

In order to remove it a special machin is used (invented in Bronte) called makina re frastuchi. This machine, with the help of a complex system of nails, lets through the fruit retaining the husk.

Once the husk gets completely removed pistachios must be dried under the sun, this is done by spreading the pistachios in large terraces during the day and stored in bags during the night. The drying process lasts from 7 to 15 days.

Once dried, the product is marketable or convertible.

The uses of these pistachios are many, the master craftsmen devise new ways to transform the pistachio more or less useful.

About 80% of production is exported , the remaining 20% is used by the Italian industries. The pistachio is a DOP product.

The price of pistachios from Bronte is quite high, it reaches 40/45 € per kilo.

farmer, however, sells it to retailers at an average price of 12 € per kilo. The largest price increase is therefore due to traders.

Sometimes the fruit is sold still to be harvested. The pistachio is harvested by the farmer but by those who buy it (the grower saves on the cost of labor).